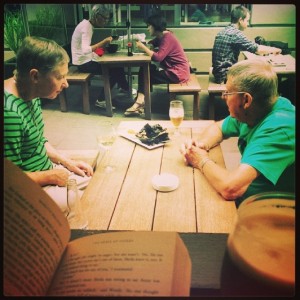 December in Auckland can be surprisingly cold for a Brisbane native, and I found myself escaping the wind inside a pub in Durham Street East with a secondhand book and an India pale ale.

I perched on a stool at the pub’s front window overlooking the tables outside and opened my book. It was warm enough inside that I could take off my windbreaker, so I took the chance to settle in comfortably for a while.

To my right were a man in his twenties and a woman I think he was hoping to impress, and outside were an elderly husband and wife. I sipped my beer and turned pages, half-reading and half-listening to the people around me.

A waitress went to the outside table to take down their order, and the husband chose three dishes from their tapas menu. He asked the waitress how he should pay for their food – would she bring a bill, or should he go inside and pay at the bar?

The waitress said, ‘He’s already paid for your food,’ gesturing upwards to the man to my right.

I lost interest in my book, then, as the confused man asked the waitress to clarify. She repeated: the man sitting beside me had paid for the old couple’s meal.

Initially hesitant to accept her explanation, he looked up to the window and asked, ‘But why?’

My neighbour shrugged. ‘I just wanted to. Enjoy your evening.’

His wife had said nothing throughout, and I looked at her more closely. She seemed tired, perhaps; her eyes appeared to wander, and she seemed to forget she had a glass of wine in front of her. Her husband would remind her now and then by moving her hand to the glass, at which she’d focus her attention and lift it to her lips.

If a relationship could leave visible traces, theirs would be a series of trails drawn from hand to shoulder, fingertips to mouth. He seemed always to be touching her solicitously:  reaching across to gently dab the corner of her mouth with a napkin, or guiding her hand to a plate.

The young man seated beside me moved outside then to smoke a cigarette, and he and the husband began to talk. The conversation began with the older man offering to buy the younger a beer, and moved into an exchange of stories: who they were, why they were here.

The older couple were tourists in the city, like me. But instead of travelling on a whim, they had come to visit their daughter on this part of a longer journey.

The wind had cooled further, and she changed seats to sit beside her husband. She pressed in close to him, and he put his arm around her. She seemed a little more anxious, so he leaned in to murmur in her ear – and she burst out laughing.

Their daughter arrived then, and she ordered more wine. I could see though that her mother was uneasy: she was cold, and her eyes darted about anxiously. She stood several times, and each time her husband held her hand and spoke some soothing words so that she would sit down again.

Her daughter reached in to her gym bag and pulled out a towel, which she placed on her mother’s lap in an attempt to capture a little warmth. I could see that she and her father wanted to stay a little longer, but it seemed they would soon need to leave. Their glasses were close to full, and their conversations only just begun.

I looked at my jacket, and considered things. The next day, I would fly back to an oppressively hot Brisbane summer. I rather liked my jacket, but it was inexpensive and could easily be replaced before the following winter.

Outside, I saw a family who were running out of time. They had perhaps an hour at most to sit outside the pub in the falling cold; but more than that, they were inexorably losing a wife and mother.

‘Hey, excuse me,’ I said. The daughter looked up, and I held out my jacket.

The daughter thanked me, and began to fuss over her mother. ‘Here, put this on. No, here, let me help. There you go.’

I gave them a few minutes, then quietly put my book in my bag and slid off my stool. Wearing my jacket, the old woman was calmly leaning in to her husband, tucked comfortably under his arm. He and their daughter were laughing, and I walked quickly to and through the door and out into the street.

I didn’t look over my shoulder as I strode away – I didn’t want to catch the daughter’s eye, because if she’d realised I was leaving she’d have tried to return my jacket. I could not have explained my reasons to her clearly, but I had been in the presence of a relentless love that evening, and a jacket was trivial.

I clutched my arms to my chest as I hurried back to my hostel.